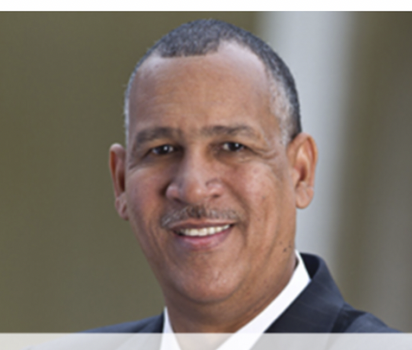 Rev. Robert Crummie is the fourth child of the late Edwin and Doris Crummie and a native of Washington, D.C. He graduated with a B.S. in Economics/Business Administration from Benedict College and with a Th.M. from Dallas Theological Seminary (where he served as president of his class and recently was invited on their Board of Trustees). He is in the final stage of completing his Doctorate of Ministry at Gordon-Conwell Theological Seminary. He also holds an honorary doctorate from the Denver Institute of Urban Studies.

After serving as a Grants Management Specialist at the NIH he did a four-year stint as a missionary with CRU (formerly Campus Crusade for Christ).

Rev. Crummie accepted the invitation to serve as the Vice President of Carver College in September 1996 and in May 2000; the Carver Board of Trustees elected him the fifth president of the college. Under his leadership the college enlarged its footprint in 2006 from 2.5 acres to 16. He led Carver through initial accreditation in 2006 and its 10 year reaffirmation with ABHE through 2021. He guided the college to access Title IV funding in 2010 and recently has expanded its academic offerings to include degrees in both Psychology and Business. His leadership also brought a men’s and women’s basketball team to the college which both enjoy competitive play in the NCCAA, Division 1.

Rev. Crummie was licensed to preach by Dr. David Durham at Mount Sinai Baptist Church in Washington, D.C. and ordained to the gospel ministry by Dr. Tony Evans at Oak Cliff Bible Fellowship in Dallas, TX.

In 1998 Rev. Crummie was elected pastor of the Mount Calvary Missionary Baptist Church, in College Park, GA. His vision for Mount Calvary is, “Growing the Church, to Glorify God.” A vision that has expanded both the church ministries and membership. Mount Calvary’s vision this year is, “Desiring the King in 2018.”

Rev. Crummie is married to the lovely Dr. Carla Michelle Crummie, an educator and life coach. They have one son, Robert Wayne, II a standout athlete and one daughter, Meagan Michelle, a budding actress and gymnast.

His life vision is simply to go to heaven and take as many people with him as possible! His favorite hymn is “Near the Cross.” His favorite pericope of Scripture is Matthew 26:36-46. His favorite pastime is watching romantic movies with his queen. And his favorite hobbies are riding motorcycles and playing basketball. Oh, he still got game